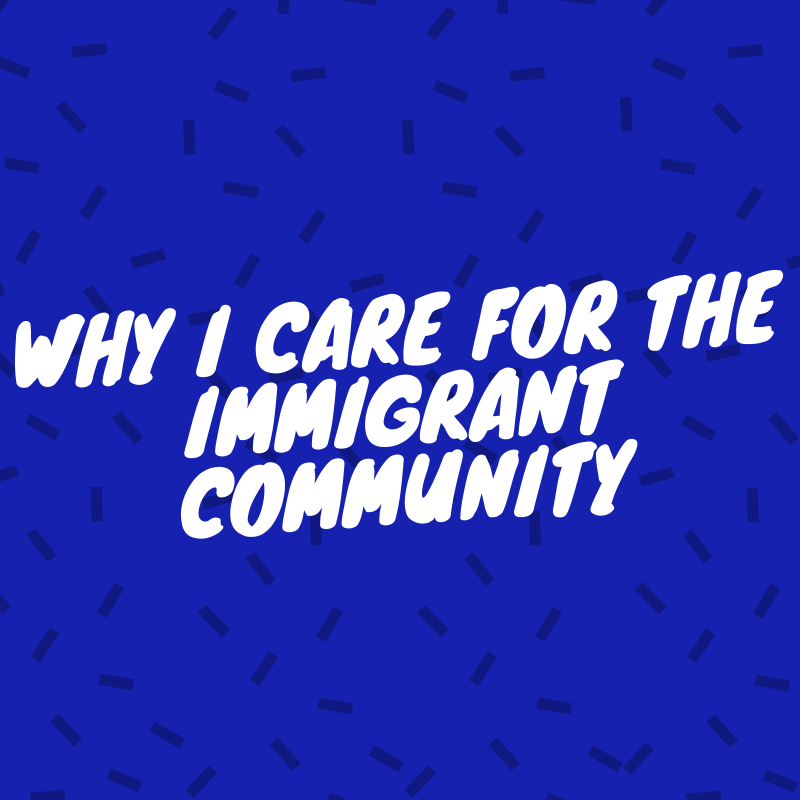 Why I Care for the Immigrant Community

By The Immigration Coalition January 29, 2019 No Comments

Long term commitment to any one cause requires constant reminder as to why you began and whether the cause is still worth the time and energy it requires. I realized recently that many of my friends and family probably aren’t close enough to me to have heard my reasoning for why this cause has such a pull on me. Without knowing the “why,” the “what” can be confusing and even concerning at times. I am fully aware that some of the things I say are provocative. I am fully aware that many of those who know me have developed a negative perception of me based on my beliefs and passion. But I am okay with this. This doesn’t concern me because I have a deeply seeded “why” – a “why” that today I feel the burden to share – because I feel that I’m not being fair to those who disagree and those who are concerned that I’ve been overtaken by liberalism. I should have done this long before now – and for that, I apologize.

My story is deeply connected to the gospel of Jesus Christ. I’m not sure who I would be or what would grab my attention without Christ – but I know that my heart for the immigrant is deeply grounded in my understanding of the person and work of Jesus. Let me explain.

My perspective of this cause can best be understood in context (obviously). Context is story. Our lives are lived as a series of stories, and therefore as humans we best understand through story.

Act I of this story from my perspective, and for brevity, can be plotted between 1492 and the 1920s. Throughout this period, the United States of America was a bright shore on the horizon of a chaotic and tumultuous sea. People the world over found hope in the idea of a new land, a land uninhabited (or freshly inhabited) and full of possibilities. With borders wide open, this land was free to be home to whomever felt the call enough to get in a boat and head for the distant shore. Yes – there are many details that add flavor and color to this story – but with a broad brush we can paint this era of our country as a welcoming garden ready for planting. These first settlers and their lineage set the pace for a country that would soon lead the world in innovation, production, and opportunity.

Act II begins in the early 1920s. With the expansion, improvement, and maturation of this country came a shift in perspective. For the first time someone asked the question, “Should everyone be welcome here?”. With this question came a flood of ideas, emotions, and prejudices. As we began asking who we wanted here and who we didn’t – we began to create fresh divides between “us” and “them”. Once we exclude certain individuals based on their origin or resume, we change the criteria for joining in the national identity. Originally the only requirement was a desire to be here, the means to get here, and general goodwill toward one another. Somehow the national perspective was compromised and rather than a universal pursuit to be and create the best – we began looking for ways to be and create safety, comfort, and avoidance of the “other”.

As a believer in the gospel of Christ, this is where I begin to ask questions and alarms begin going off in my head. For the past few years I have been exploring what a healthy relationship between Christ and government looks like to the individual – to myself. In college I completely separated these two concepts, claiming anarchy and arguing vehemently that the bride of Christ is only corrupted when attempts are made to influence the secular (and in my mind – corrupt) government. After graduation I began to see (specifically through the immigration conversation) that the decisions of our government directly influenced the lives of my neighbors. I began to see that in a democracy – each individual has the right and responsibility to influence and sometimes even make these decisions. I began to feel convicted that my avoidance of any interaction with the state was a participation in decisions that impacted my neighbors.

If I lived in Act I – I would never speak about immigration (in contrast to my life now – where I speak of it often). I do believe (hope) that I would be speaking about slavery or one of the countless other injustices. This may seem a trivial point to make – but it is central to this conversation because the point isn’t about a specific issue (immigration) – it is about a gospel concept (justice/advocacy). Because I see Christ giving of himself to serve humanity, perfectly living out loving his neighbor through crying out constantly against injustice and putting himself in places where others questioned his motives and morality – I am compelled by the mind of Christ within me (1 Cor. 2v16) to be obedient as he was obedient.

What does it mean to love your neighbor? How does the gospel speak to injustice? I firmly believe that we will never represent the true heart of Christ to the world around us until we move these questions to the center of our ecclesiology. The heart of the Father is unmitigated love to all, with a common thread throughout Scripture of love for the lost, poor, broken, and oppressed. The immigrant community surely isn’t the only one to fall in these categories, but they are certainly there and in need of advocates standing on the truth of the gospel and the love of Jesus Christ.

The immigration Project exists to equip the Church to have a biblically balanced approach to immigration that shows compassion to immigrants while respecting the rule of law.