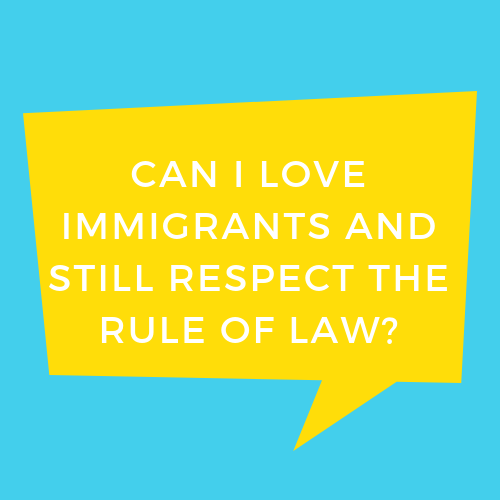 Can I Love Immigrants and Still Respect the Rule of Law?

By The Immigration Coalition January 26, 2019 No Comments

When it comes to Immigration, Romans 13:1-7 is vitally important. The Government is divinely put in place by God Himself. Christians, like everyone else, must submit to the governing authorities. Allegiance to God does not negate responsibility to secular authority. The Government is God’s way of maintaining the public good and directing the affairs of the state. And yes, those who resist authority are resisting what God ordained. This is why I believe most Christians who lean Democrat or Republican do not advocate for amnesty, open Borders, and illegal Immigration.

However, this obviously does not happen in every instance Government sometimes oversteps its rightful domain. When this happens, the believer will find it impossible to obey the ruler. Two clear examples of civil disobedience are found in Acts. When Peter and John were told by the Sanhedrin not to preach in the name of Jesus, they replied, “Judge for yourselves whether it is right in God’s sight to obey you rather than God” (Acts 4:19). Upon being released they resumed their work and consequently were taken into custody. To the charge of the Sanhedrin that they had filled Jerusalem with their teaching they replied, “We must obey God rather than man!” (Acts 5:29). Therefore, the Christian’s ultimate allegiance is to God. Wherever the demands of secular society clearly violate this higher allegiance, the Christian will and must act outside the law.

One clear example today is how we act concerning undocumented Immigrants who have been in the United States for fifteen plus years, love Jesus, members of a Churches, great neighbors to those in their community, have Children who are U.S. Citizens, and have tried to get right with the law but cannot find a solution because there’s really no line to get in. And it’s difficult to just go to their country and apply when their lives are rooted in the United States. This definitely gives zero justification that they can just stay in the United States without consequence, but we must ask, “What kind of consequences do undocumented Immigrants with narratives like this deserve?” I don’t think they deserve deportation, but I do believe Undocumented Immigrants with narratives like the one I just shared deserve a significant fine and earn legalized status over time. But we see Immigration and Customs Enforcement (ICE) detaining undocumented Immigrants with a narrative like this and deporting them to their country, thus destroying their lives and separating their families as if they’re vicious criminals and gang members who hurt the country. I’ve seen this with my own eyes. This is where I believe we as Christians must disobey the Governing authorities and exercise Biblical Justice by protecting Undocumented Immigrants with this type of narrative from deportation–all the while not saying it’s okay they don’t pay the consequences for coming to the United States illegally through them paying a significant fine and earning legalization over time.

However, none of this should change how we as Christians interact with and love undocumented Immigrants. Ever. The Church beats to a different drum. This means sharing a meal, helping Immigrants learn English, teaching a Bible study, helping Immigrant kids with homework, providing legal advice, having a meal at the dinner table, and advocating for fair and just policies. We can minister to, love, advocate, do justice for, help them get right with the law, and welcome Immigrants, AND STILL be submission to the governing authorities. It’s not against the law to do these things. It’s encouraged by God. We must never allow the undocumented status of Immigrants to justify why we should not love, care for, show hospitality to, advocate, do justice on behalf, and welcome them.

The immigration Project exists to equip the Church to have a biblically balanced approach to immigration that shows compassion to immigrants while respecting the rule of law.