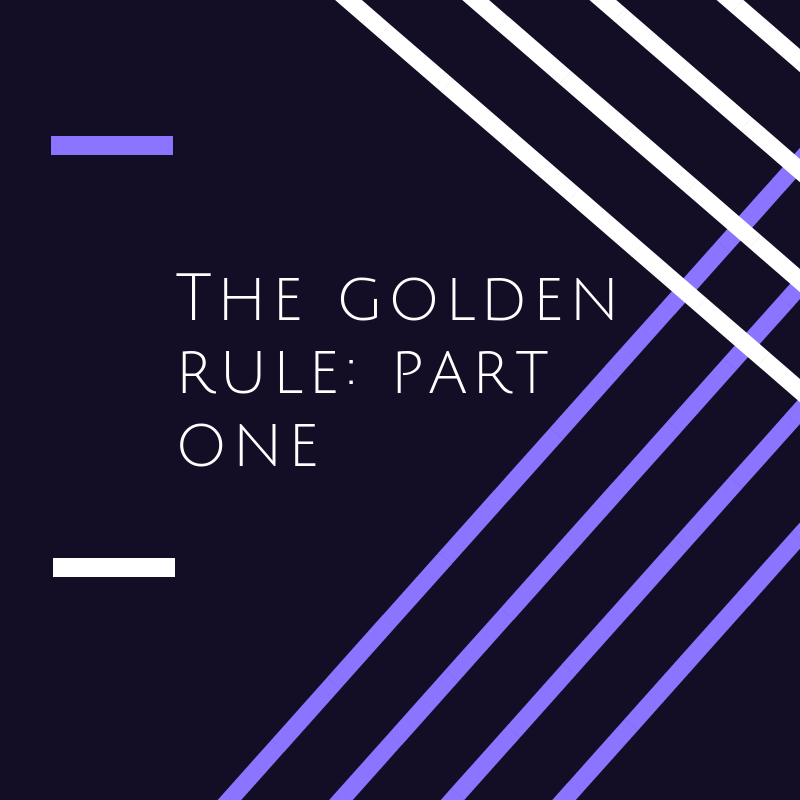 The Golden Rule: Part One

By The Immigration Coalition February 7, 2019 No Comments

“Do unto others as you would have them do unto you.”

From our earliest days we are introduced to “The Golden Rule” as a simple way to find the right way to act in any situation. Since we only want the best, or at least what is fair, done to us, we can quite easily determine how to treat others if we imagine that roles were reversed.

While this has served as a simple ethical guide for children (and adults, see Matthew 7v12), in practice we tend to disregard this approach as impractical. We see it as a good way to get little Tommy to share his toys, but when approached by the homeless requesting a few bucks, the simplicity of “How would I want to be treated in this situation?” is replaced with thoughts of “What will he spend this money on? Am I encouraging and enabling poor behavior by giving to him? Did Jesus really mean ‘Give to everyone who asks of you’?”.

This morning I’m writing from a place of conviction, as I’ve waffled over the years between both sides of the last paragraph. Today though, I’m convicted. I’m having my eyes and heart opened to see that God calls us to be generous, loving people despite the actions and reactions of those we’re called to serve. When Christ called us to treat others as we would want to be treated, he disarmed every one of us and commissioned us to be people of reckless love.

But what about when it gets deeply personal. What if we used this, not just for one-on-one interactions, but as a rule for how to approach public policy? The application is two-fold.

This doesn’t just mean that we give the best outcome to everyone in every situation – because that’s not truly what we would want if we were in their shoes. If I was addicted to heroin, though part of me would want more heroin, I would more-so want you to come alongside me and help me to get clean. I would want you to do everything in your power to help me beat my addiction.

If I were a violent criminal and you caught me in the midst of my violent crime, I wouldn’t want you to just kill me to protect others, I would want you to disable me from inflicting harm on others while living the Gospel out before me so that I could come to the saving knowledge of Jesus Christ.

We must move away from the shallow-sighted answer to every situation. Life is difficult, but as Christians we are called to approach every situation, every soul in need, from the point of “what would I most want if I were them?”.

This approach is one of the greatest reasons behind my advocacy for immigration reform. If I had lived in the United States illegally for 16 years and was married to a citizen and had citizen children, I wouldn’t want to be treated as though my existence and family were valueless unless and until I moved back across the border. I would want others to see me in my pain and predicament and to fight alongside me for a way forward. I would see that a penalty, a hefty penalty, is appropriate. I would also be deeply confused by Christians who would rather see my wife and children lose their husband and father than see a pathway forward.

Whether it is homeless veterans, scared refugees seeking asylum, parents of sick children staring at astronomical medical bills, or DACA recipients, as the body of Christ we are called to treat each as we would like to be treated.

The immigration Project equips the Church to embrace a biblically balanced approach to immigration that shows compassion to immigrants while respecting the rule of law.