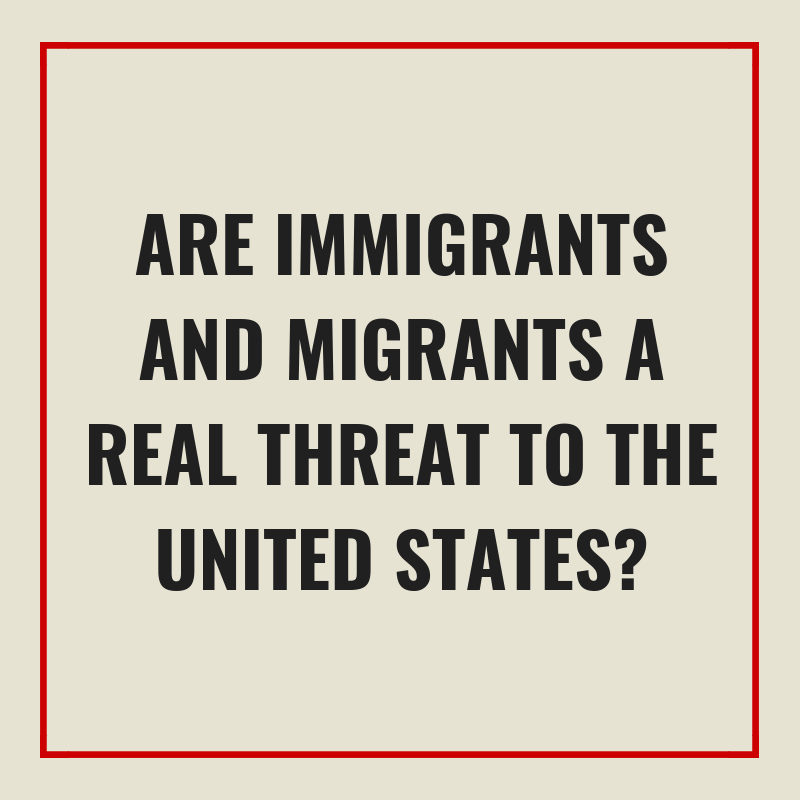 Are Immigrants and Migrants a Real Threat to the United States?

By The Immigration Coalition February 8, 2019 No Comments

For years, undocumented Immigrants and Migrants have been generalized as vicious criminals, murderers, and national threats to Americans in the United States. President Trump, respectfully, has used the generalization of undocumented Immigrants and Migrants for a Border wall on the Southern Border as his central argument. And although we urge balanced bipartisan legislation that secures ports of entry along on Southern Border with better technology and the hiring and training of Border Patrol Agents, implements a wall and/or barrier in needed places along the Southern Border, gives a pathway to citizenship for Immigrant Dreamers with DACA, augments the already 650 mile long fencing on the Southern Border, and protects Immigrants with Temporary Protective Status (TPS)–we do not believe President Trump and others should generalize all undocumented Immigrants and Migrants as vicious criminals, murderers, and national threats because the vast majority are not.

So this begs the question: Are Immigrants and Migrants real threats to the United States?

According to theThe Marshall Project, from 1980-2016, Immigration has increased 118% while crime has decreased 36%. Yet according to the Washington Post, over the past decade shootings, bombings and other violence by white supremacists and other far-right wing attackers has been on the rise—and has surged since President Trump took office.

In other words, although we need Border Security, the REAL threat to the United States, it seems, is coming from white supremacists and other far-right wing attackers who are native born citizens, not the vast majority of undocumented Immigrants and Migrants. The REAL threat is coming from inside our Borders, not outside.

Therefore, maybe God is sovereignly bringing Immigrants and Migrants on longterm or short term mission trips to the United States (Acts 18:26) to help reduce crime, make our neighborhoods safer, disciple American Christians, and share the Gospel with White supremacists and other far-right wing attackers—not the other way around. Maybe the vast majority of Immigrants in our neighborhoods are people to love, not problems to solve.

The immigration Project equips the Church to embrace a biblically balanced approach to immigration that shows compassion to immigrants while respecting the rule of law.