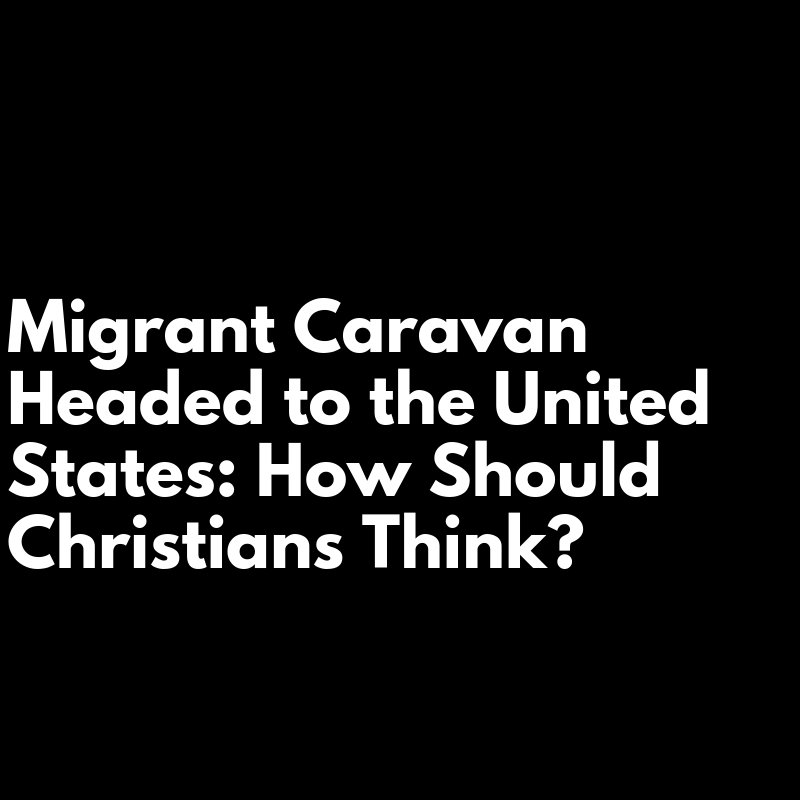 Migrant Caravan Headed to the United States: How Should Christians Think?

By The Immigration Coalition October 23, 2018 No Comments

There’s no secret Immigration is complex. This is a topic that has been hard for Christians to navigate through for years because of the differences in policy and how we should respect the rule of law but also love Immigrants. And one of the issues lately has been the 7,000 Migrant Caravan traveling to the U.S.-Mexico Border to seek asylum. There has been several questions we have received at The immigration Project, but the most frequent has been: How should we think about this as Christians? I want to briefly answer this question below.

Regarding the 7,000 Migrants on their way to the US-Border, the Government has a role to play in securing our borders (Romans 13:1-4), and as Christians we should be against illegal Immigration. Currently, however, law allows genuine asylum seekers to present themselves and have their case heard. This is what the 7,000 Migrant caravan seems to want to do, which would be legal and obeying the law, not breaking it.

However, as a Christians, we should not only think of the rule of law and have concern for Border security, but also think of how we might love, welcome, and show concern for this 7,000 Migrants Caravan because they are humans created in God’s Image in desperate need of not just physical help, but surely many are in desperate need of a Savior named Jesus. (Luke 10:25-37; Matthew 25:31-42; John 3:16).

These 7,000 Migrants are just as valuable to God as every American Citizen. They are not people to hate, detain, and separate from one another—they are people to love. They are not gang members and criminals—they are made up primarily of fathers, mothers, children, and babies fleeing economic and violent hardship.

These 7,000 Migrants are just as valuable to God as every American Citizen. They are not people to hate, detain, and separate from one another—they are people to love.

Therefore, let us take action by praying the Government upholds the rule of law, protects our borders, and allows the 7,000 Migrant Caravan to exercise their right to seek asylum legally because this is U.S. law, but also pray for the 7,000 Migrants, especially for the ones who end up qualifying and are allowed into the U.S. after presenting their asylum case. Let us also pray for those who don’t qualify for asylum and are sent back to their country.

As Christians, we respect the rule of law and we also show compassion, concern, and love for the Immigrant and Migrant. It’s a both and, not an either or. This is our calling.