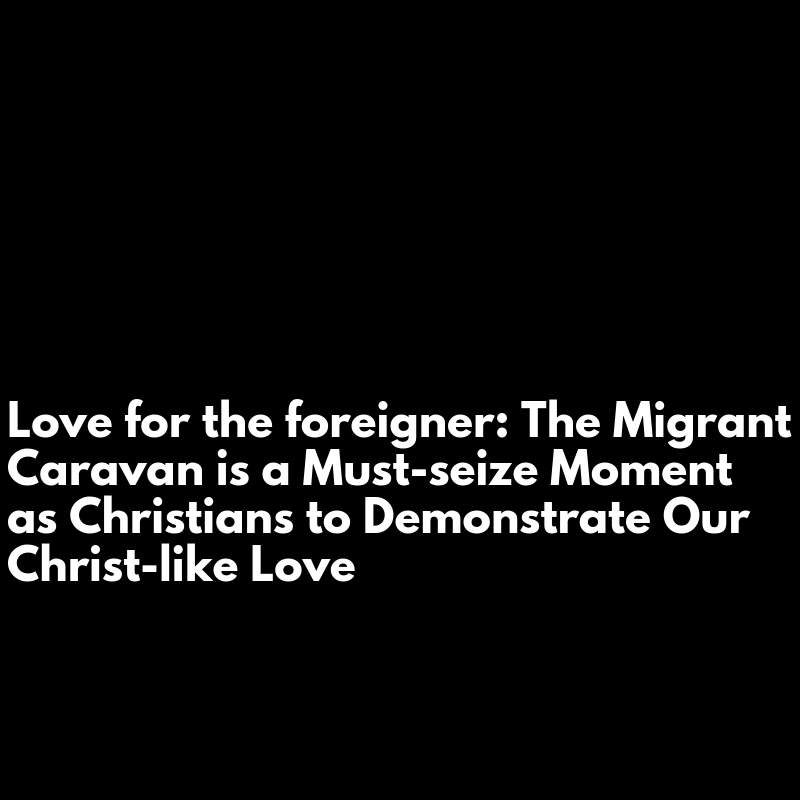 Love For The Foreigner: The Migrant Caravan Is A Must-seize Moment as Christians To Demonstrate Our Christ-like Love

By The Immigration Coalition November 13, 2018 No Comments

The images and footage depict a people on a pilgrimage, clutching young children and trenching through harsh environmental conditions to keep moving forward.

This group of people has been deemed the ‘migrant caravan,” an amalgamation of tired and battered souls from Central America who have latched on since the pilgrimage north began out of Honduras. Some are seeking asylum, some just seeking a better life in America—where many have family already living.

The U.S. national tenor on immigration has been laced with hatred the and fear for the last several years. As a collective nation, we have drawn sides on how to look at the “immigration problem” as either open or closed borders.

At Join the Journey, the organization that I started out of seeing the hurt in Haiti firsthand following a tragic earthquake in 2010, we often think first with our heart and ask questions later. We see people for who they are—made in the image of God—and commit to a journey with them to restore brokenness through Christ and practical poverty-intervention strategies.

It’s why we partnered with the Immigration Project earlier this year on their mission trip to the border to give much-needed compassion to the families seeking refuge in Christian safe houses in El Paso. We do not know their names – but God does – and we knew that they were in need and need of a compassionate hand to let them know God cares for their plight.

Those that recognize and understand God’s sovereignty recognize that all of our ‘trappings’ are not ours but His. We often selfishly proclaim that we earned our standing and others should follow suit of “earning” their way.

But what if that system is unjust? Should we still uphold it? More importantly, should we hide behind the ‘rule of law’ in order to further oppress those that need us most?

This caravan is our moment as Christians to love, to advocate, and to call on our leaders to steward change that recognizes the plight of the hungry and hurting. If we simply pick sides, we have lost this moment.

God cares for every one of those in this caravan…even the very hairs on their head. We need that God-sized heart to do likewise.

Adam Cole is the Executive Director of  Join the Journey, a Christian organization whose mission is to relentlessly serve others before self through hand-up strategies that aid physical and spiritual hunger in places of extreme poverty.