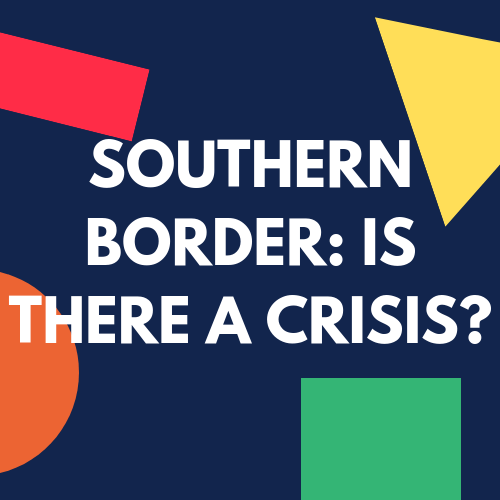 Southern Border: Is There A Crisis?

By The Immigration Coalition January 16, 2019 No Comments

– 300 of 650 miles are vehicle barriers. Not designed to stop human trafficking.

Is there a crisis at the Southern Border?

Not at the level President Trump communicates, but there is to a certain degree. It’s more of a humanitarian crisis. According to the New York Times, in 2017 Border apprehensions were at their lowest point since 1971, but there’s still a lot of apprehensions of undocumented Immigrants and drugs, and we cannot ignore this.

What am I trying to say? We need to secure ports of entry, implement a wall in needed places along the Southern Border, and augment the already 650 mile long fencing with better barriers that not only keep out vehicles but Immigrant smugglers bringing in drugs and human trafficking. Now, we don’t want to keep out Immigrants who want to come to the U.S. and seek asylum, or keep out all Immigrants in general–our country thrives because of the Immigrants in the United States–both from documented and undocumented. However, it’s not immoral to keep the percentage of criminal Immigrants who drug traffic and human traffic out of the United States by securing ports of entry and implementing a wall in needed places. This just makes sense. And we can do so while still loving, welcoming, showing hospitality to, advocating for, and doing justice on behalf of Immigrants coming into our country and already in our country.

Securing ports of entry and implementing a wall in needed places is a both and, not an either or.