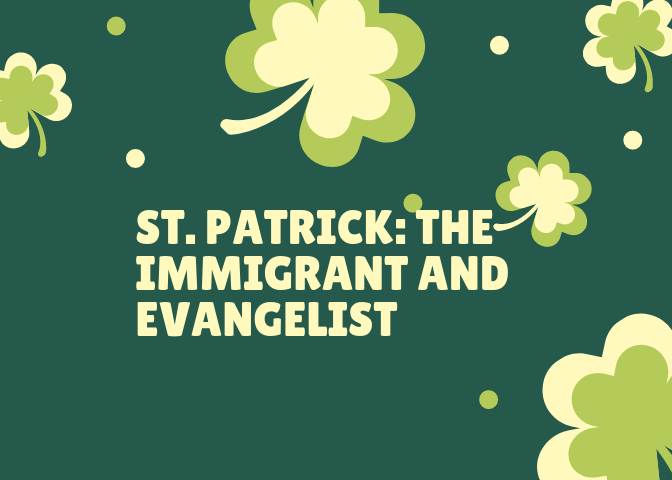 St. Patrick: The Immigrant and Evangelist

By The Immigration Coalition March 17, 2019 No Comments

Although St. Patrick’s Day is a holiday known for drinking beer and wearing green because if not, you run the risk of being pinched–this day has far more meaning.

Two important facts about St. Patrick that bring deeper meaning to this holiday.

1. St. Patrick was an Immigrant.

The Confessio of Patrick, gives more clues as to his life and tells us that when he was about 16, he was captured by Irish pirates from where he lived in Britain and taken as a slave to Ireland before he escaped returning to his family. In other words, St. Patrick was an Immigrant, someone who had known hardship and suffering. According to Micheál Mac Craith, who was lecturer in Modern Irish at the National University of Ireland, said, “St. Patrick was an immigrant and an outsider and a refugee in Ireland, in fact he was kidnapped, he came to Ireland first very much against his will. He was badly treated, but he managed to escape, but at the same time he had some inner conviction that the Irish people were worthwhile and he studied and prayed and under what he saw as divine inspiration he decided to go back and introduce Christianity to them. So, he is one of our first known immigrants to Ireland and when we think today, maybe how harshly we tend to treat immigrants, we should remember that St Patrick was or very first immigrant…”

2. St. Patrick was an Evangelist.

St. Patrick was an evangelist who received his call from the Lord to return to Ireland and spread the Gospel. He longed to share the Gospel of Jesus Christ with the Irish. Through St. Patrick’s evangelistic ministry, God brought thousands of people to repentance and faith in Him. God uses St. Patrick to evangelize in cities and in the countryside. He ordained priests and planted churches for God’s glory and fame. St. Patrick was truly one of the great Christian missionaries.

St. Patrick’s Day has far more meaning than drinking beer and wearing Green–this holiday is a time for us as Christians to remember that he was once an Immigrant who endured hardship and suffering, as well as one of the greatest Christian Evangelists. These two facts should compel us to remember our Savior, Jesus, who is the greatest Evangelist and was once an Immigrant as a child.