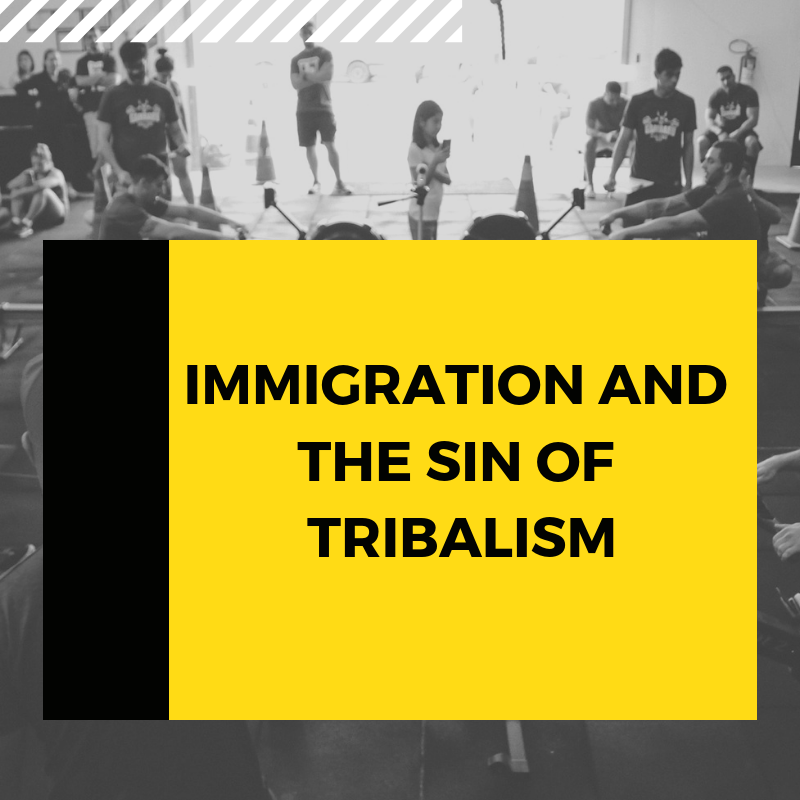 Immigration and The Sin of Tribalism

By The Immigration Coalition March 4, 2019 No Comments

Immigration is clear biblically, from loving and welcoming Immigrants to submitting to the Governing authorities–yet at the same time, it is also extremely complex concerning policy because the Bible doesn’t give us a clear prescriptive approach. This very complexity alone, for years, has divided some Christians who lean either conservative or progressive to the point where they do not associate themselves with one another and pursue avoidance at all costs.

Why is this? Shouldn’t Christians still be unified despite their disagreements on Immigration? Of course! However, one of the biggest reasons why Immigration has compelled many Christians to be so divided is because they have adopted the sin of tribalism.

Tribalism refers to a group attitude of undeserved pride and superiority based solely on identification with a group. It is the tendency to look down on other people for no other reason than they don’t belong to the group. Often it includes looking down on members of the group who are not perceived as “native” to it. Furthermore, tribalism appears when a community closes its ranks around an illusion of superiority and excludes others for the purpose of increasing feelings of superiority. A tribe invents “badges” or emblems of superiority that to outsiders are totally illusory. Tribes rarely recognize themselves as tribal in this sense; members really do think they are superior to outsiders.

A good example of this would be the religious lawyer in The Parable of the Good Samaritan (Luke 10:25-37). The lawyer believed obeying the Greatest Commandment meant loving only those who look, act, and think like he did–in his case, Jews. The lawyer had a tribe rooted in pride and superiority to those who were vastly different. This is why Jesus attempts to show him his blind spot by sharing the story where the Good Samaritan is the one who shows compassion to the beaten man by helping him, not a Jew.

Today, some (key word: SOME!) Christians also struggle deeply with the sin of tribalism because of their allegiance to either the Conservative Republican or Progressive Democratic Party and their views on Immigration. Not saying we shouldn’t have a party we lean towards–if that’s your decision, please so. But when we place our allegiance, identity, and hope in a political party, then this leads to placing party allegiance above allegiance to God.

Tribalism compels some Christians to falsely believe their Political Party and its views on Immigration are superior to the other party’s. They look down upon those outside of their Conservative Republican or Progressive Democratic tribe, which compels them to view everyone else as vastly inferior to the point where they avoid them at all costs and somehow believe this is okay.

When tribalism is embraced this way from some Conservative Republicans or Progressive Democrats, they end up giving license on pretty much everything, even if corrupt, to those Presidents or Legislators who represent their party, yet are enraged when the other side does the same thing. This is a big problem. For example, President Obama bypassed congress to enact DACA and his supporters praised him and Conservative Republicans were enraged. Recently, President Trump bypassed Congress by declaring a national emergency for a Border Wall and his supporters praise him and Progressive Democrats are enraged. Now, I believe DACA recipients should be protected and given a pathway to citizenship–I also believe in Border security with a multifaceted approach, including a wall/barrier in needed places. However, my point here is both President Obama and President Trump bypassed Congress to achieve their goal, which is wrong to do, but were praised by their political tribe while the other side was enraged. This, as I said earlier, is a big problem.

1. Remember the Gospel of Jesus Christ. Jesus is the one who died on the cross for our sin and resurrected from the dead, not the Republican or Democratic Party. Therefore, we must remind ourselves of His unconditional sacrifice so our allegiance is found in Him alone.

2. Remember that despite our disagreements on Immigration, Jesus unifies us–which means after we have our disagreements, we should embrace one another because at the end of the day we are brothers and sisters in Christ.

3. Remember that Jesus has called the Church–a people on mission, to be family. We argue and don’t get along sometimes, but we are still family and need to work issues like Immigration out with another. We are called to be the number one advocate to share the Gospel and advance God’s Kingdom–let’s act this way.

We exist to equip the Church to embrace a biblically balanced approach to immigration that shows compassion to immigrant while respecting the rule of law.