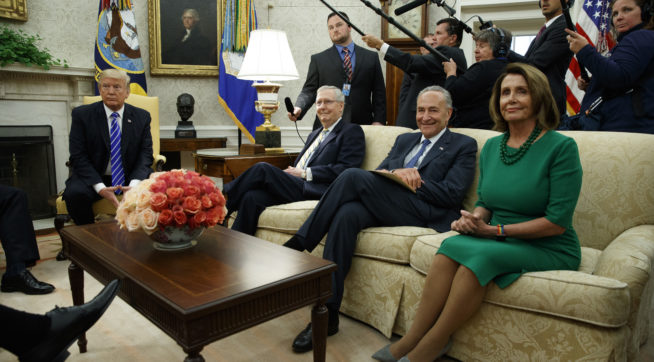 By The Immigration Coalition September 14, 2017 No Comments

According to POLITICO, President Trump is sending positive signs on making a legislative deal which would protect Immigrant Dreamers with Deferred Action for Childhood Arrivals (DACA).

House Minority Leader Nancy Pelosi (D-Calif.) said that President Trump told her he would sign the Dream Act of 2017, which is a solid bill that would provide a path to permanent legal status for so-called Dreamers — but that he also wants some border security.

This morning, President Trump said these words on Twitter concerning Immigrant Dreamers with DACA that believe to show his willingness and compassion to pass a law to protect them.

Why does all of this matter?

President Trump has said horrific rhetoric about Immigrants over the years and there is no place for this morally and Biblically, but for him to have meetings and tweets about protecting Dreamers with DACA, possibly shows that God may very well be changing his heart. In fact, I believe He is.

Now, this does not mean I am a supporter of President Trump, but this does mean I am hopeful that God is doing a work in his heart, and I am thankful for this because he is my neighbor (Luke 10:25-37).

In the inerrant and infallible Word of God, we see that before the Apostle Paul became one of the greatest evangelists of all-time and wrote thirteen letters of the New Testament, he was a murderer of Christians–he despised them and wanted each one to be killed or thrown in prison.

But, as he was on the Damascus Road to arrest the disciples, Jesus came to him and drastically changed his heart from a man who despised and hated Christians, to someone who loved Jesus with all his heart and loved every disciple of Jesus.

What if through the meetings about protecting Immigrant Dreamers with DACA, President Trump is having a Damascus Road moment and Jesus himself, through the power of the Holy Spirit, is changing his heart from one that has been cold toward Immigrants, to one that is in love with Jesus and in love with Immigrants?

If Jesus can change the Apostle Paul’s heart then He can definitely change President Trump’s heart.